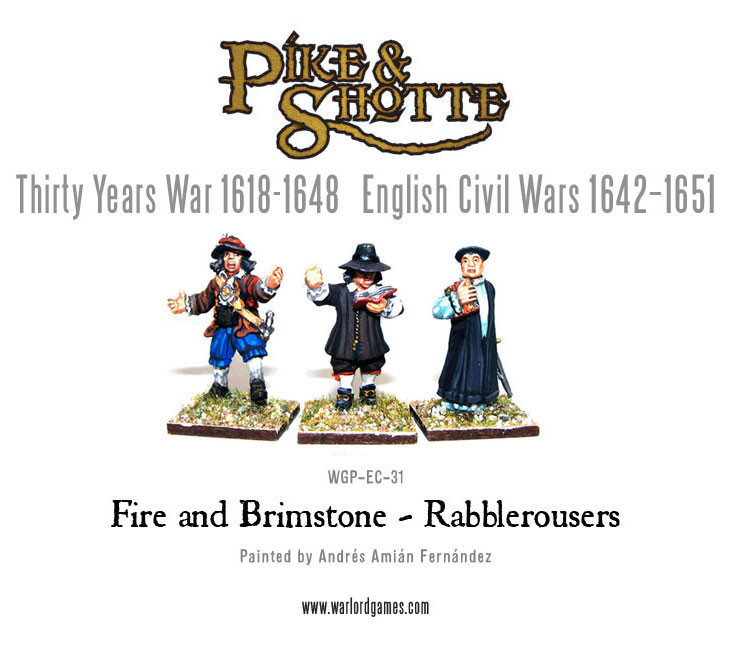 Art.-Nr. WGP-EC-31
SFr. 7.50
lieferbar
1
Artikelbeschreibung
First off we have a Ranter, also known as a Leveller, Digger, or Agitator. The Parliament forces were full of them. Charismatic, forceful, bellicose, determined men who would hector and cajole their comrades to club together to be listened to and demand change!
Quite what they wanted could change daily, but commonly it would, not unreasonably, be about not being paid for 5 months, having no clothes to wear or no food to eat. Worse than that, sometimes the ale ran out! Often enough it was rather higher questions that were being asked. Matters of religion and God’s command of man. “When Adam delved and Eve spun, who then was the gentleman?”, was a question asked in the ranks.
Warlord’s Ranter is a New Model Army man who is obviously appealing to his fellows to see reason. He has a scarf wrapped around his arm as a sign of his politicisation, a pamphlet on soldiers’ rights stuffed into his hatband, and a suitably barmy expression. All he needs now is a chat with that nice Mr Cromwell - he seems a reasonable man….
Our next model is a Cleric based in some part on Archbishop Laud, who was done in by the Roundheads for being a bit old-fashioned in his views (ie, not being a bigoted Puritan). This saintly man has a sly expression, and worryingly carries a sword by his side (for protection or to enforce his preachings?).
We envision him being used mainly in Royalist armies to give a sermon before the battle. A bit of fire and brimstone before they go forward to do the Lord’s work. He is also just the man to accompany Montrose’s Irish Brigade in their campaigns (more on those in a newsletter soon…). Montrose had many Catholics in his army and they no doubt had priests to hear their confessions and crimes. We suspect they must have been busy men…
Our Puritan Preacher is a bit of a misery. He carries the good book and isn’t afraid to use it! As you can see he is giving his flock a severe talking to, hopefully inspiring them to great things in Parliament’s cause… “One King, KING JESUS!”, was one of the Parliamentarian’s regular chants.
This model can be used in all Parliament armies, and especially in the New Model Army. In a pinch he can be put in Covenanter units as well (they were all Protestants) to wind up the lads against the filthy Highlanders and their Popish Catholicism!

This product is supplied unassembled and unpainted. Glue and paints not included.