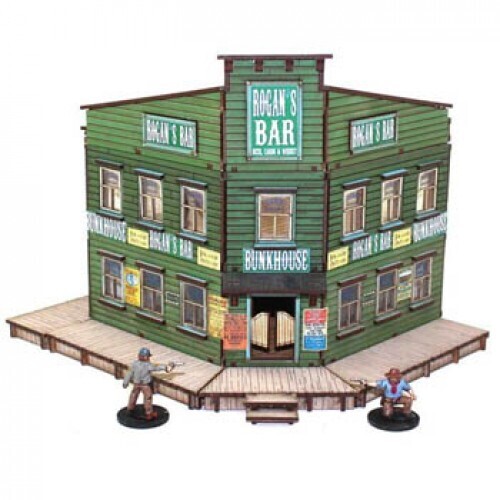 28S-DMH-S2 is a ‘28S’ 4Ground model kit, ‘28S’ means it is highly detailed inside and outside with many pre-painted parts.

As an early settler when this town was still called a camp, Jim Rogan staked an ideal corner location for his bar. Bars at this time were simple affairs without the adult entertainment to be found in saloons but in the right location they could still turn a coin. Unfortunately within two years Jim had died, found on the road 10 miles outside of town he had been shot 7 times (6 with point blank powder burns). But if it was a rival bar or saloon owner who wanted Rogan's bar gone they didn't count on Cathie Rogan taking the bar on after her father's murder.

After Jim Rogan’s murder his daughter Cathie did her best to make a go of the bar. With it’s prime location on a main street corner and a reputation for good beer, clean cards and fine whiskey, Cat managed to make some real good money. Three years after her father's death Cat had the bar extended up top with the addition of a bunk room. Rogan’s Bar and Bunkhouse is a favoured first option for many a traveller, familiar with stopping over in the town of Dead Man’s Hand for a few nights. It would seem life is good for Cat but she wouldn’t have got where she is now if she was a fool and she’s no fool; well aware there’s more than one set of covetous eyes looking to add Rogan’s Bar and Bunkhouse to their own boardwalk empire.

This set provides you with £4,00 off of the retail price.