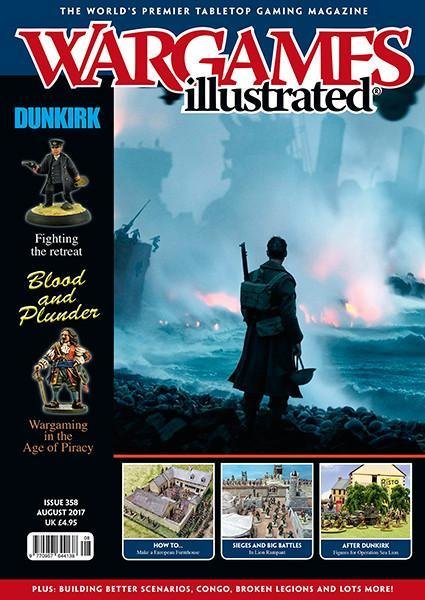 New and upcoming releases in the wargames world.

Our introduction to this month’s theme, with a focus on the forces involved.

Exclusive content from Mark Latham which blends his Broken Legions rules with another of his offerings from Osprey.

THEME: BATTLE ON THE ESCAUT: KEEPING DISASTER AT BAY

A look at events during the invasion of France 1940, with some thoughts on gaming one of the initial battles.

Jay White shares some of his experiences and ideas for creating scenarios.

Dom Sore has some expert advice for gamers looking to recreate the actions, before, during and after the Dunkirk evacuation of 1940, using Bolt Action.

HOW TO... BUILD A EUROPEAN FARM

Paul Davies takes his inspiration from La Haye Sainte to show us how to make a tabletop farmhouse.

Two scenarios, centred around our theme, which present players with the opportunity to turn the tide in the battle for France.

Dave Tuck and Malc Johnston present their ideas for moving Lion Rampant from skirmish to mass battle level. Incorporating sieges along the way.

A little show with big fans, we take a look around Legionary 2017.

LOST GIANTS OF THE CONGO

When scientists from the Societé Géographiqué discover a ‘lost’ plateau in Africa, a new ‘adventure’awaits for players of Congo.

We take a look at this top award winning game from Salute 2017.

Our figure spotlight this month focuses on the range of figures available for fighting the ‘what if’ German invasion of Britain 1940 (AKA Operation Sea Lion).

BASE, WE HAVE A PROBLEM

How to base your figures for both single and multi-based games.

THE WARS OF JAMES II PART 1

Simon MacDowall begins a series of articles extolling the virtues of gaming during the reign of James II of England, VII of Scotland.

Hoist the Jolly Roger and prepare to set sail in this Rules Showcase for the new Pirate skirmish wargame from Firelock Games.