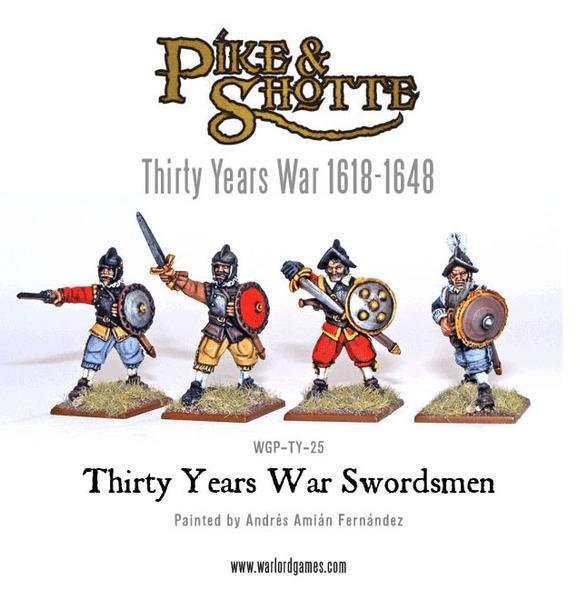 Amongst the dense pike columns and sleeves of shot, could sometimes be found soldiers like these sword and buckler men. Sometimes used to defend the colours, sometimes formed into assault parties, they would certainly be where the fighting was the most fierce.

They would quite possibly be formed by young gentlemen and were highly skilled in swordplay, in many ways a throwback to the ancient idealism of the Roman Legionary.

The Spanish forces used them in great numbers where they had a fearsome reputation, hewing their way through packed pike ranks or either assaulting or defending a breach, parrying with their shield and darting their swords into unarmoured spots on thier foes.

They could also be fielded as bodyguards for generals and senior officers, the Prince of Orange bodyguard being a great example on the Protestant side.

These great Warlord models are tooled up for the fray wih all manner of helmets, quality armour and of course the trademark sword and buckler. Two of the men are packing a pistol too, one with it on his belt and the other having a seperate arm, there being 3 differing bodies in total and a repeat body and loose arm to give the pistol option.

These models would also work for armies of an earlier period, Elizabethan springs to mind immediatey...

In the pack there are 8 random metal swordsmen, supplied unpainted and unassembled

This product is supplied unassembled and unpainted. Glue and paints not included