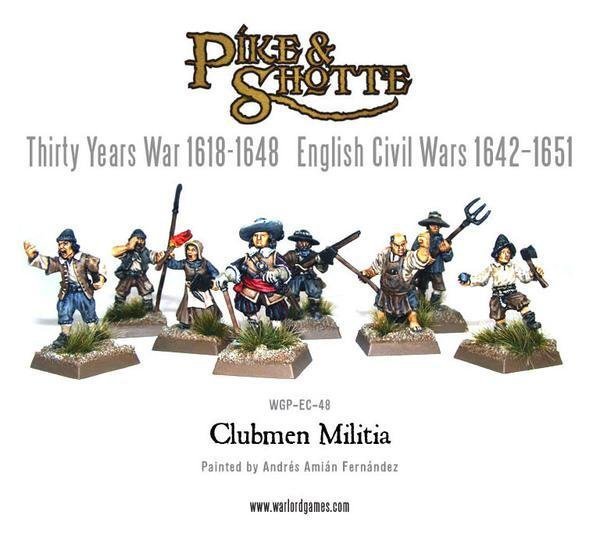 England in 1642 was a land of peace and sea of tranquillity compared to the horrors of the Continent’s terrible 30 Years War. So when the King and Parliament fell out and fisticuffs spread throughout the land it was like a bolt out of the blue…
No doubt most thought it would all be over by Christmas, but the war dragged on and on and, as usual, it was the common folk who suffered the most. Raiding parties from both sides waged a small war as a fight for supplies and personal plunder took hold of the soldiery who were, it is fair to say, often poorly provided for. This became too much for the good yeoman people of the midlands, and firstly in Worcestershire, then the West Country, the locals organised…
Led most often by their social betters, the villagers and small townsfolk formed associations, or ‘Clubs’, sworn to defend their livestock, beer and persons from any marauding soldiery whomever they were. They armed themselves from whatever were available, largely agricultural tools, and with whatever other weapons the local squirearchy could avail himself of. Some Clubmen groups even fielded cavalry!
They fought a few actions, seeing off small raiding parties, and even sometimes allied with an army for temporary advantage, though no general could count on the goodwill of these bands for long.
So Warlord present a savage looking bunch of villagers, led by their handsome squire (directly above), mustering on the village green before marching off to ‘beat the bounds’ of their parish and see off any intruders.

This product is supplied unassembled and unpainted. Glue and paints not included