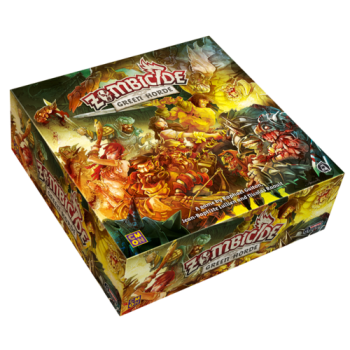 This sequel to the smash hit Zombicide: Black Plague will bring players back into a world of deadly medieval fantasy, this time filled with infected orcs and goblins who will put survivors to the ultimate test. This green menace is not only stronger than their human counterparts, but they also tend to gather into massive hordes that ambush the survivors when they least expect it. Uncover the many surprises the Green Horde has in store for you!

They were a brave people, living on the edge of the Orcish lands?on the Western frontier. It was a rough country, where nature grows wild, and the weather can change at a moment’s notice. They fought with the brutish Orcs many times, withstanding raids on their villages and fields. Never once, in all those battles, did they consider leaving for safer regions of the world. This was their land, their ancestor’s land. Generations had grown up in its green forests and fields, taking what the earth gave them, and defending what was theirs. But the Orcs wererelentless, becoming bolder and bolder as time went on.

When the plague hit, it wasn’t long before the Orcs became infected. Allit took was one bite, and the sickness spread through their ranks like wildfire. What the plague robbed the Orcs of in intelligence, agency,and personality, it replaced with a single-minded goal: destroy theliving and feast on their flesh. The Orcs band together now, a pack, a horde. They travel the countryside, attacking the towns they come across, but now stealing some crops or a cow or two doesn’t suffice. They’re not satisfied until the people of the village are dead... or perhaps worse, undead.

A new challenge for the Survivors is the Horde. It represents a growing group of Orc zombies that are ready to enter the board in an unexpected location and ambush the Survivors. As zombie cards with the Horde symbol are drawn, one extra zombie miniature of the same type is set aside, collectively forming the Horde. They will be locked into place until an “Enter the Horde!” card is drawn, spawning the Horde on the board. Any Survivor caught on their own near this roving menace would best beat a hasty retreat.

With such menacing new foes, the Survivors are going to have their hands full dealing with the Green Horde. Luckily, they’ll have some awesome new weapons and spells on their side to help combat the rotting masses. Things like the Lava Burst, the Norse Sword, and the Bone Kukri will all be helpful when hacking through a pack of the undead. Oh, and if they should gather together too tightly, the Survivors can always hit them with the catapult...(did we not mention the catapult?).

Zombicide: Green Horde includes ten new challenging quests, featuring some of the toughest scenarios a Survivor has ever had to face. With new terrain, like ledges and water holes, and the ever-present threat of the Green Horde making an appearance, the team will have to plan their routes carefully. Sometimes avoiding trouble is better than facing it head on! Zombicide: Green Horde is the next chapter in the ever-evolving world of Zombicide. There’s no rest for the Survivors if they hope to battle their way to a new hope and a new beginning.