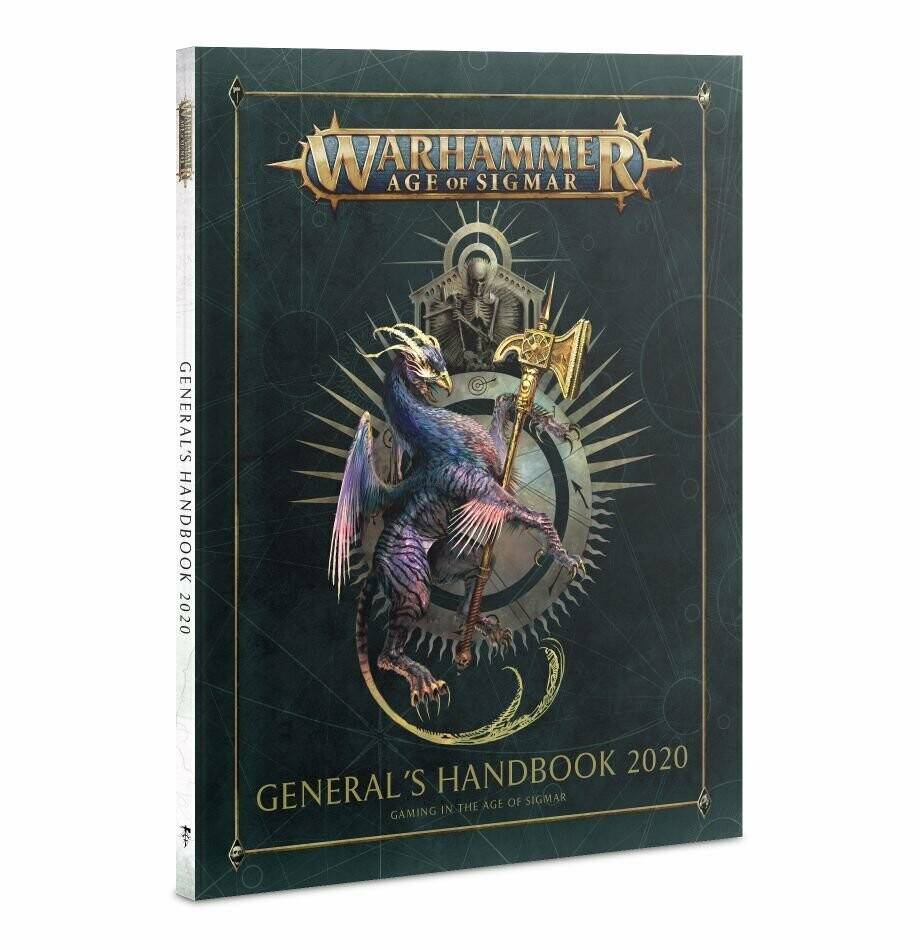 The essential 2020 General’s Handbook updates the core ruleset to enhance your games of Warhammer Age of Sigmar. No matter how you like to play, there’s something in here for you.

The Player’s Code – a set of guidelines to follow, ensuring that each player has a fun and rewarding experience.

- Skies of Slaughter – Take the fight to the air with high-flying battles amidst the clouds. These rules were previously published in White Dwarf, including five battleplans (called Skybattles), new warscrolls for using flying monsters and engines of war in Skies of Slaughter, and campaigns to link your games together.

- Open War Coalition Battle Generator – Play multiplayer games, with each side split into teams. You’ll fight alongside your teammates to win, but each player also has their own secondary agenda to complete. The new suite of rules and random generator tables will ensure no two games are the same.

- The Whisper Engine – Battle for control of a map in a linked campaign between 4 to 7 players.

- Coalition of Death – Use the Team Battle rules and this set of 3 battleplans to create memorable multiplayer experiences.

- The Anvil of Apotheosis – Create a bespoke Hero to lead your armies, conquer the Mortal Realms, and carve a name for themselves.

- 12 Pitched Battle battleplans – Mix up your games with a new set of strategic challenges.

- Coalition Matrix – This chart breaks down the interaction between all 24 of the existing factions within Warhammer Age of Sigmar. Some armies make for better allies!

- Realm of Battle Rules – Discover rules to represent each of the Mortal Realms in your games, including potent artefacts of the realms and Realmsphere Magic

- Matched Play Auxiliary Objectives – Check out 18 new and updated objectives for the 2020 season.

- Pitched Battle Profiles – This separate, 32-page booklet contains pitched battle points values, unit sizes and battlefield roles for the units you can use in games of Warhammer Age of Sigmar, as well as scenery, endless spells, Compendium and Forge World models.

© Warner Bros. Entertainment Inc. All rights reserved. THE HOBBIT: AN UNEXPECTED JOURNEY, THE HOBBIT: THE DESOLATION OF SMAUG, THE HOBBIT: THE BATTLE OF THE FIVE ARMIES and the names of the characters, items, events and places therein are trademarks of The Saul Zaentz Company d/b/a Middle-earth Enterprises under license to New Line Productions, Inc. (s18)