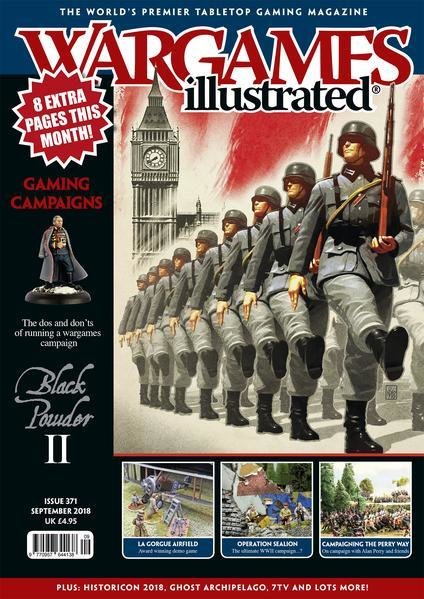 A special look at what we ‘Spotted At’ Historicon 2018.

Pete Brown is back, with some thoughts on running a Wargames campaign.

Co-author and Sub-Editor Wayne shares some of the decisions and ideas behind this stand-alone rules system coming soon from Crooked Dice Game Design Studio.

Theme: The Diamonds of Elias Skull

Colonel (Retired) Bill Gray shares some thoughts on the running of campaigns and realities of campaign gaming using computers.

Rick Priestley explains the main changes made to this extremely popular games system and the upcoming re-vamp.

Alan Perry takes us through a typical Perry Campaign Season, taking in two different campaigns played with his chums.

Having won an award at Partizan 2018 for Best Demo Game, we caught up with Dave Andrews and Aly Morrison to find out more about this game.

Pete Brown discusses how to use works of fiction as a framework for your campaigns. He uses ‘Operation Sealion’ (a wargaming classic!) as an example.

“Liston very carefully I shall say zis only once” - Mike Wilkins introduces us to his quirky Bolt Action tournament force.

Dr. Steve Tibble continues this fascinating series with a look at Crusade battle formations and how they could be applied on the tabletop.

David Bickley shares his thoughts on how he went about adapting the Black Powder rules for the Great War in 1914.

Our man in the States, Dave Taylor, takes us on a tour of some of the best tables at this massive US convention.

Just who or what are the Virai, and why is their presence in the Gates of Antares universe such a potential game changer? Nick Simmerson takes a closer look.

Rupert Mitchell presents the second part of his article on gaming with plastic soldiers, this time looking at what’s out there for the 54mm gamer.