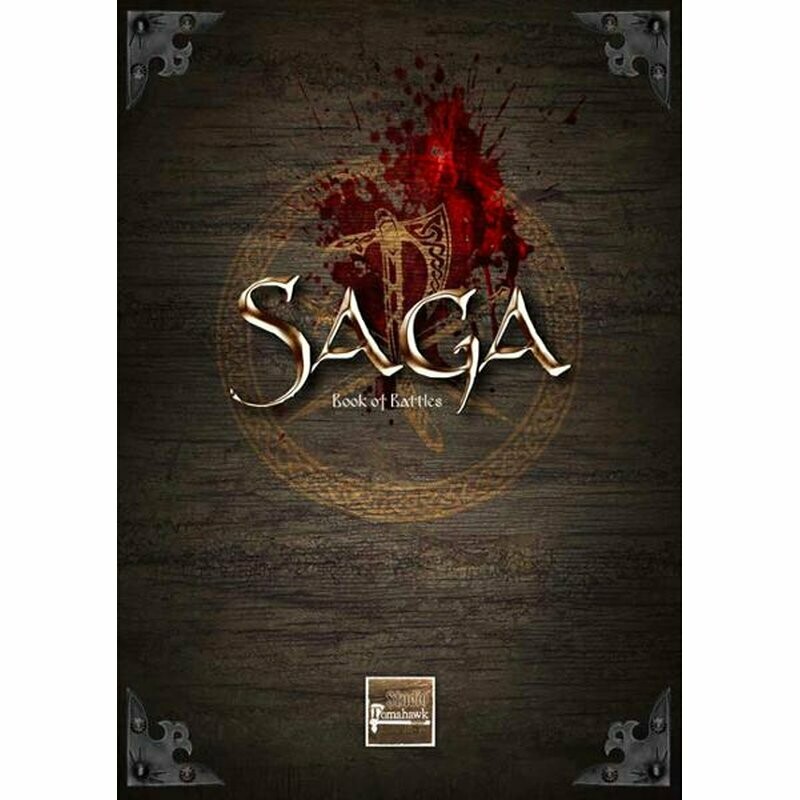 The Book of Battles is an unusual supplement. It is not a SAGA Universe, but a collection of scenarios and game variants that can be applied to any Universe in which you decide to play. It is therefore a perfect complement to the rulebook, a companion that enlarges its horizons by proposing alternatives to the basic Clash of Warlords scenario.

SKIRMISHES
The book’s first chapter is devoted to skirmishes, and offers only one scenario, Battle of Heroes, BUT it offers a multitude of possible combinations (more than five thousand!), guaranteeing almost infinite re-playability.
Skirmishes offer balanced games, and require no specific terrain pieces or particular rules not already included in Clash of Warlords. Thus, any group of players with access to the terrain pieces used in Clash of Warlords can play multiple variations of Battle of Heroes.

BATTLES
The second chapter is dedicated to battles. Before presenting the battle scenarios, this chapter offers a set of special rules specific to these scenarios, notably covering new terrain types, like buildings. Battles offer balanced encounters, but require specific terrain pieces, or the introduction of particular rules which can give an advantage to certain ways of assembling a warband. They are also noticeably more complex than Clash of Warlords and Battle of Heroes, but also offer very unusual situations for your Warlord to test himself against.

LEGENDS
The third chapter covers legends, narrative scenarios that tell an interesting story rather than providing a perfectly balanced struggle. It will suit players wishing to explore SAGA in a different, less competitive, and more narrative way. They sometimes place constraints on how warbands are assembled, in order to save the story from the excesses of gamers! Thus, it is best to agree with your opponent in advance that you will play a legend during your session, so that each player can bring an appropriate warband. The chapter begins with a collection of special rules that will be used in these specific scenarios.

MASS BATTLES
The fourth chapter deals with games of three or four players. Its introduction describes the particular rules for this style of play, before presenting several scenarios designed to play SAGA with three or four players. Mass Battles are a unique chance to appreciate SAGA with every member of a gaming group, each one leading their own warband. The balance depends as much on the warbands involved as the relations between the players; some scenarios will win renown for the most diplomatic players, and others the most opportunistic!

SAGAS
The Book of Battles ends with a chapter for players who want to link their games and weave them into an overarching saga. Rather than detailing a traditional and constraining campaign system, the Sagas chapter offers a simple experience system, allowing your Warlord to increase his influence and develop new talents.