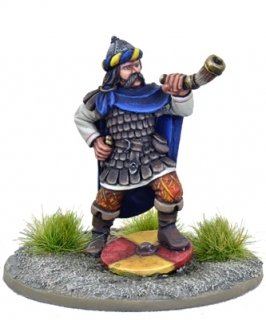 Frankish Hero. Roland lived during the 8th century and was perfect in charge of the defence of the frontiers with Brittany during the reign of Charlemagne. According to some chroniclers, he was also the nephew of the Emperor.  In second half of the 8th century, Charlemagne moved with a large army to Saragossa in the Spanish peninsula, responding to a call for help from the governor of the city, Sulayman ibn Yaqzan al-Arab, who in conflict with the Emir of Cordoba. It will cost two points to field Roland in a Carolingian Frankish faction. Roland has the same stats and special rules as all other Warlords, and only generates two SAGA Dice each turn. Roland and all units in his starting warband must fight on foot and may not be mounted.