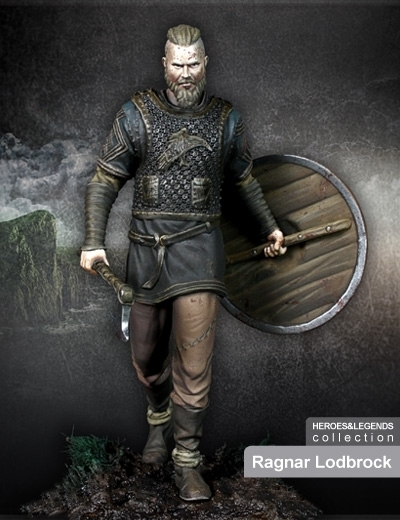 Ragnar Lodbrok or Lothbrok (Old Norse: Ragnarr Loðbrók, "Ragnar Hairy Breeches") was a legendary Norse ruler and hero from the Viking Age described in Old Norse poetry and several sagas. In this tradition, Ragnar was the scourge of France and England and the father of many renowned sons, including Ivar the Boneless, Björn Ironside, Halfdan Ragnarsson, Sigurd Snake-in-the-Eye, and Ubba. While these supposed sons appear to be historical figures, it is uncertain whether Ragnar himself existed. Many of the tales about him appear to originate with the deeds of several historical Viking heroes and rulers. According to legend, Ragnar was thrice married: to the shieldmaiden Lagertha, to the noblewoman Þóra Borgarhjǫrtr, and to Aslaug. Said to have been a relative of the Danish king Gudfred and son of the Swedish king Sigurd Hring, he became king himself and distinguished himself by many raids and conquests until he was eventually seized by his foe, King Ælla of Northumbria, and killed by being thrown into a pit of snakes. His sons bloodily avenged him by invading England with the Great Heathen Army.