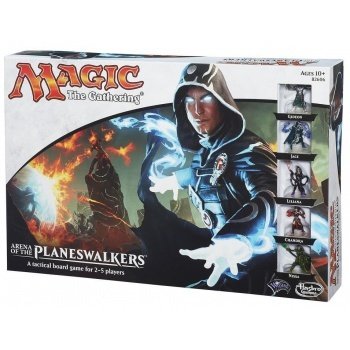 MTG - Arena of the Planeswalkers - Board Game - DE Brettspiel

The next generation of Magic combat awaits in the incredible customizable battle arena of this Arena of the Planeswalkers tactical board game! Each of the 5 mighty Planeswalkers comes with their own unique powers and squads, so it's up to each player to summon creatures and choose the right spells to win the game. Will players survive their opponents' assault and strike back with the perfect spell to dominate the arena?

Customize Your Arena This Magic: The Gathering Arena of the Planeswalkers tactical board gamecombines epic Magic: The Gathering combat with tactical decision-making and strategic battlefield positioning. Customize the battlefield with the modular gameboard and start the battle! Each player acts as a Planeswalker, summoning armies, casting game-changing spells, and aiming to outmaneuver their foes on the battlefield. With the 60 spell cards, players can set up traps, trigger combos, and surprise their opponents.

Wizards of the Coast, Magic: The Gathering, Magic, their respective logos, , the Planeswalker symbol, and all character names and their distinctive likenesses are property of Wizards of the Coast LLC in the USA and other countries. Hasbro and all related terms are trademarks of Hasbro.

Play as Your Favorite Planeswalker

Battle rages on the drifting, mana-rich plane of Shandalar, and the mightiest of heroes meet to hone their combat skills in the arena. You can play as your favorite Planeswalker as you assume the role of one of these mighty heroes and unleash tremendous power against your opponents. Choose from 5 epic Planeswalkers: Gideon Jura, Jace Beleren, Liliana Vess, Chandra Nalaar, or Nissa Revane. Summon your creatures, control the board, and out-position your opponents to win the game!

Great for Newcomers and Longtime Magic: The Gathering Fans

The Magic: The Gathering Arena of the Planeswalkers tactical board game is great for new players and longtime fans alike. Both types of playerscan enjoy this figure-based game of strategy. While fans can appreciate references to the world of Magic: The Gathering, no prior knowledge is needed to play. Players can have fun summoning creatures and choosing the right spells to change the game! Who will be the last player standing?

Includes terrain boards for different battlefields and ruin piecesPlay as one of Planeswalkers: Gideon, Jace, Liliana, Chandra, or Nissa

Includes figures, tiles, glyphs, dice, and cards for a battle

• Does not include cards from the trading card game.