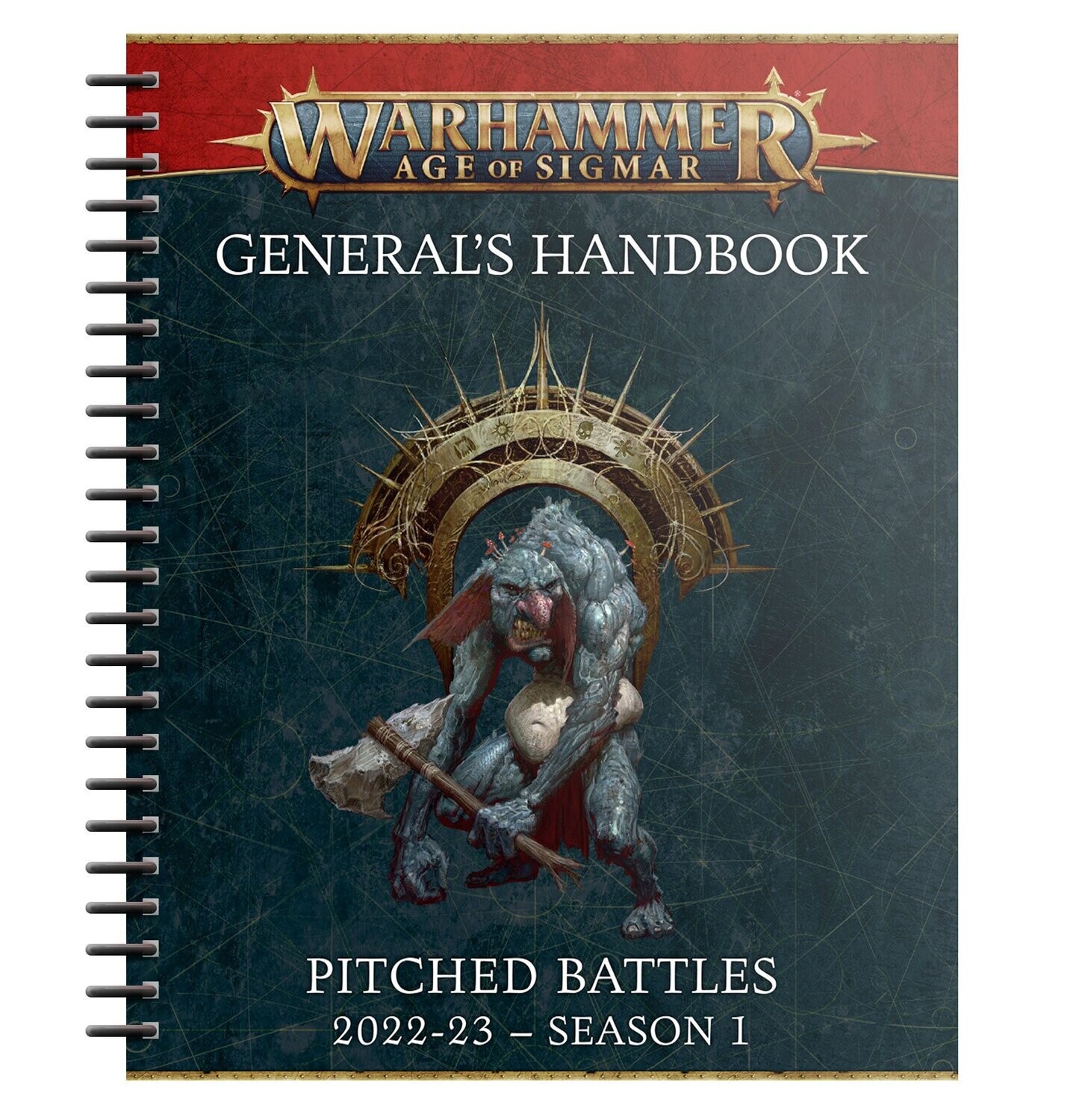 Art.-Nr. 60040299124
SFr. 42.00
lieferbar
1
Produktbeschreibung
Bitte beachte, dass es sich um ein Produkt in englischer Sprache handelt. This essential supplement gives you new ways to enjoy games of competitive Warhammer Age of Sigmar for the first season of 2022-23, including updated battleplans and Pitched Battle profiles for every unit and army. This pack includes two books: the 96-page spiral-bound hardback General’s Handbook, and the 34-page softcover Pitched Battle Profiles book. Inside this season's General’s Handbook, you'll find: – An introduction to setting up Pitched Battles for matched play games of Warhammer Age of Sigmar, including guidance on the Battle Ready standard of painting for your miniatures, and a comprehensive list of the official publications which can be used in Pitched Battles – Detailed background information for Gallet, the wind-blasted continent of Ghur where the action takes place. You’ll learn all about this arid landscape, the beasts that dwell there, and the tunnels underneath it – Region of War rules for Gallet, the Splintered Land, with special rules that focus on empowering Battleline troops, a terrifying new Realmsphere spell for all Wizards, and an aggressive Realm Command available to all players – Two additional core battalions that players can include in their army: Expert Conquerors, well-versed in seizing objectives, and Bounty Hunters, tasked with bringing down the mightiest foes – Six grand strategies that dictate an army's goals in battle by offering victory points if completed by the end of the game, whether you spread your veterans across the battlefield in a Show of Dominance, or eliminate your opponent's core to demonstrate that there's No Place for the Weak – Eight battle tactics that can be used to gain an advantage each turn by earning additional victory points, such as taking revenge for fallen warriors with An Eye for an Eye, or choosing to Outmuscle your opponent's veterans by driving them from an objective – 12 battleplans for setting up games of Warhammer Age of Sigmar, with a variety of special rules and victory conditions, such as claiming volatile amberbone deposits in the Realmstone Cache, fighting over the twisting tunnels of the Nidus Paths, or struggling to the bitter end in a claustrophobic Turf War – Updated warscrolls for the following 17 endless spells: Horrorghast, Aethervoid Pendulum, Chronomantic Cogs, Emerald Lifeswarm, Geminids of Uhl-Gysh, Malevolent Maelstrom, Prismatic Palisade, Purple Sun of Shyish, Quicksilver Swords, Ravenak's Gnashing Jaws, Soulsnare Shackles, Suffocating Gravetide, The Burning Head, Umbral Spellportal, Soulscream Bridge, Shards of Valagharr, and Lauchon the Soulseeker – The core rules and player's code for games of Warhammer Age of Sigmar Please note: The ring-bound design of the General’s Handbook and layout of the battleplans have been designed so that the book can be folded flat to save space, while still providing an overview of the essential information to easily reference once the game has begun. Inside this season's Pitched Battle Profiles book, you'll find: – An introduction to Pitched Battle profiles, and descriptions of the four different types of battlefield role: Artillery, Battleline, Behemoth, and Leader. – Details on how to use allies in Pitched Battles in this season – Updated Pitched Battle profiles for every unit, faction, and Grand Alliance in Warhammer Age of Sigmar, as follows: Order: Cities of Sigmar, Daughters of Khaine, Fyreslayers, Idoneth Deepkin, Kharadron Overlords, Lumineth Realm-lords, Seraphon, Stormcast Eternals, and Sylvaneth. Chaos: Beasts of Chaos, Blades of Khorne, Disciples of Tzeentch, Hedonites of Slaanesh, Maggotkin of Nurgle, Skaven, and Slaves to Darkness. Death: Flesh-eater Courts, Nighthaunt, Ossiarch Bonereapers, and Soulblight Gravelords. Destruction: Gloomspite Gitz, Ogor Mawtribes, Orruk Warclans, and Sons of Behemat. – Updated Pitched Battle profiles for the 17 endless spells from Malign Sorcery and Forbidden Power, and the Krondspine Incarnate of Ghur. PLUS: The General’s Handbook 2022 also comes with a card token board, which contains 14 double-sided tokens as follows: - 10x Objective / Prime Objectives - 1x Battle Tactic Token – Gaining Momentum / Head-to-Head - 1x Battle Tactic Token – An Eye for an Eye / Outmuscle - 1x Battle Tactic Token – Desecrate Their Lands / Against the Odds - 1x Battle Tactic Token – This One’s Mine / Barge Through Enemy Lines

© Warner Bros. Entertainment Inc. All rights reserved. THE HOBBIT: AN UNEXPECTED JOURNEY, THE HOBBIT: THE DESOLATION OF SMAUG, THE HOBBIT: THE BATTLE OF THE FIVE ARMIES and the names of the characters, items, events and places therein are trademarks of The Saul Zaentz Company d/b/a Middle-earth Enterprises under license to New Line Productions, Inc. (s18)