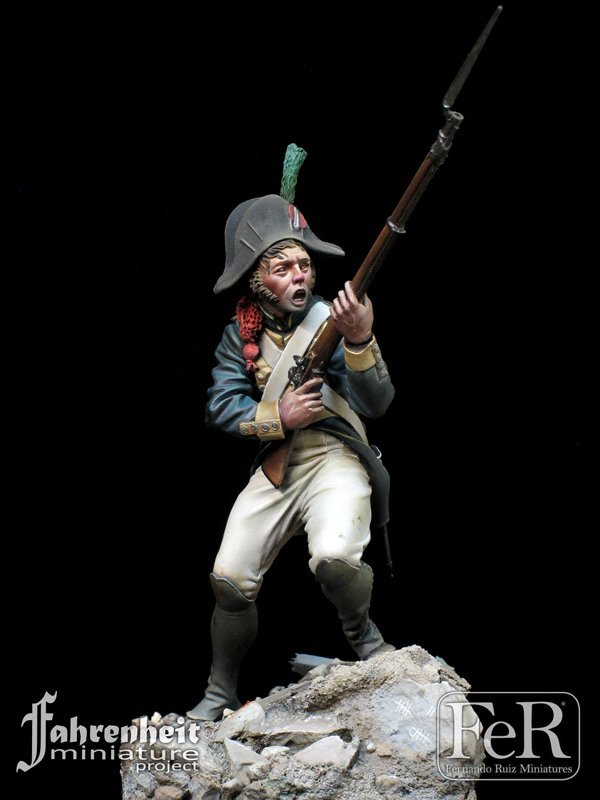 The Peninsular War started after the Spanish people uprising in Madrid during May the 2nd, 1808. This uprising was the fulfillment of a strategy started by diverse social sectors and it lead to the different organized revolts in diverse points of the city: the surroundings of the Royal Palace, Puerta del Sol, Puerta de Toledo, El Prado or the Monteleón Park. Together with soldiers and officers like Daoiz and Velarde, the citizens, young men and women joined the fight in the streets.

The people had a prominent role in those events an also in all the following that finally led to the end of the French occupation, in the way that Benito Pérez Galdós in his National Episodes makes the citizen, the artisan or the farmer, the main character: “that history that could and should have been written without characters, without celebrities, with the sole elements of the elemental hero, the solid and holy people […]”.

The miniature is inspired in the Augusto Ferrer Dalmau’s painting “El Sitio de Girona”. About the uniform, we can say that it is quite versatile to portray an ample number of regiments from the Spanish Army of the Napoleonic Wars. Both flaps and buttons, headdresses and weapons are identical in all the infantry corps during the Peninsular War, with only very few exceptions.