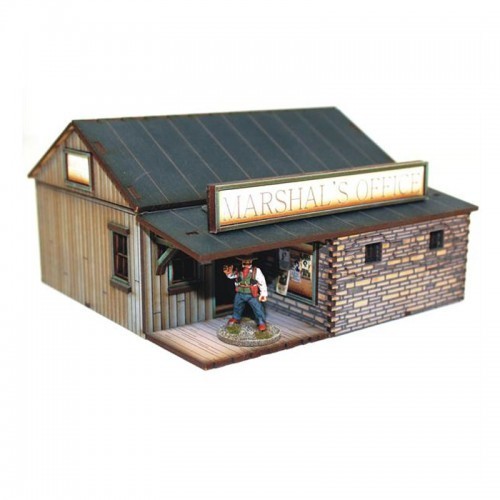 The level of detail with this kit is great not only the external doors are all hinged and can open and close at any time but also all the cell doors work. The outside cell walls can all be pulled out for those cowboy gangs who want to break out their arrested gang mate. Posters are provided to cut out and place on the notice board and all the building signage is actually laser etched in, with signage options for Marshal, US Marshal and Sheriff included.

The first lawman in town, known as a marshal, would be appointed by the town’s goodly folk to look after the town but especially their own interests . Usually hired with a reputation for ‘keeping the law with the speed of his draw’ a marshal was often a wanted gun slinging outlaw in other states.

Sometimes the locals would have an election for a town sheriff, he was not a hired gun and usually had a lot of local support and so able to deputise other locals more easily to help him. The only real official law that passed through these towns beyond the recognised counties (sometimes these camp towns were even in Indian territory) were lawmen appointed by state and territory authority, these were the US. marshals.

Brave and hardy men often with very shady pasts these US. marshals tracked the wanted and brought them to justice, they were often the only law and some would say often above the law. A US. marshal had the power to raise a posse and take it were he will, across all county lines in his hunt for wanted desperadoes, tracking them down and bringing them in ‘Dead or Alive’! His office could be in the most remote of places used more as a rest over cabin than as a place of work. Here every few weeks he would also bring in captives to await instructions or for their collection by other US. Marshals.

A US. marshal had no power of the law over a county sheriff in his own county but all other marshals and town sheriffs could be arrested by him even in their own towns. So it was not unknown for the local marshal (a wanted gun slinger) and his deputies to be in a shoot out with a US. marshal and his posse.