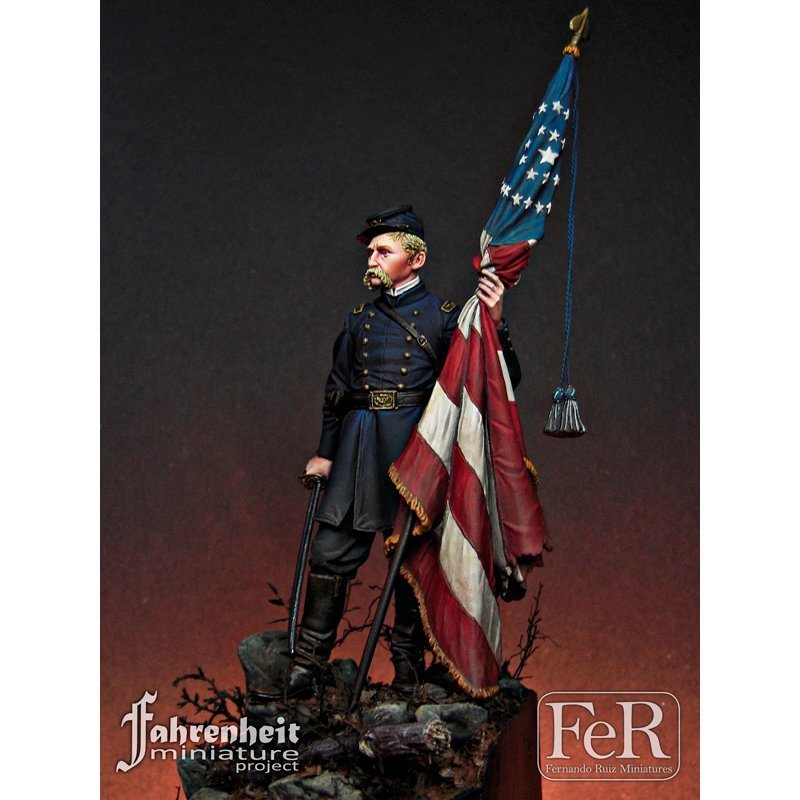 Number of parts of the kit: 11

Joshua Lawrence Chamberlain (1828-1914) was an American scholar, soldier and politician. He was specially well known by his participation at the Battle of Gettysburg, during the American Civil War.

He had no military formation or experience prior to the war and he enlisted as a voluntary to serve in the 20th Maine regiment. He started as Lieutenant Colonel and the regiment, even if it participated at the Battle of Fredericksburg had a more or less discreet record service until Gettysburg. Shortly before the battle he was appointed Colonel.

During the Battle of Gettysburg, at July 2nd 1863, Chamberlain and the 20th Maine occupied a strategic position on top of a wooded hill called Little Round Top. He received orders of preventing the Confederates to take the position, as it would have meant the loss of the whole hill and the advantage over the Confederate Army. After fending off several rebel assaults over the position, the 20th Maine had almost no ammunitions so Colonel Chamberlain drew his saber and led a bayonet charge that caused the final retreat of the Confederates from the hill. It is generally accepted that this feat of heroism saved the day for the Union Army. He was awarded the Congressional Medal of Honor for his participation.

Joshua Chamberlain was wounded a few times during the war, once of severity. He was expected to die but recovered in an almost miraculously way and served with his unit until the end of the war. He was granted the honor of commanding the delegation of Union troops during the capitulation ceremony at the end of the war.

Our miniature wears the regulation uniform of a Union colonel that is commonly associated with the character at the Gettysburg action. Even if it is not likely that Colonel Chamberlain carried the colors of the 20th Maine, we have decided to portray him in that situation; for us it symbolizes the stubborn defense, the valor and the determination of this regiment and its commander.