You are here: Home / Shop 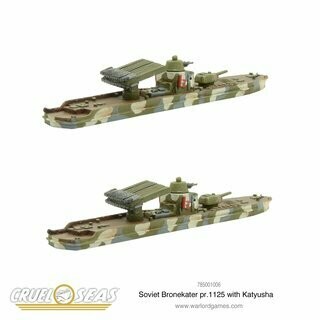 A most peculiar type of riverine and estuary craft was also developed by the Russians. This was the 1124 and 1125 class of armoured rivercraft or Bronekater. These shallow draught craft, drawing only 2-foot of water, could penetrate river systems and lakes, even being moved by rail and lorry to new locations. Some featured numerous armoured turrets, even T-34 tank turrets, and again, frequently equipped themselves with rails for the Katyusha launchers. They were tough little boats capable of receiving and dishing out punishment, though they had a small crewand were slow and poor deep watercraft.